What All Parents Should Know About Persuasive Design

With devices in kids' hands at younger ages than ever before, the current generation of parents are the first to grapple with the issue of how technology is affecting their children.

Screen Time Is Increasing Due to Persuasive Design

It is no shocker to most parents that apps, video games, and social media sites can be addictive. 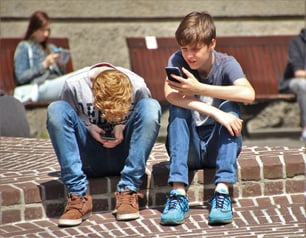 What’s alarming is that the advancement of technology is moving so fast, our knowledge of its impacts can’t seem to keep up. And unless you happen to be a digital anthropologist, the average parent doesn’t have the time to study these things in depth. That's how I feel, anyway.

For most working parents, using devices to placate our young children can mean we get an extra moment to finish tidying the house or prepare dinner uninterrupted...*raising my hand here, I’m definitely guilty*. My kids got their first tablets at ages 10 and 7, during a time when iPads were new and I was an intense workaholic/single parent. I did not take the time before purchasing their shiny new devices to research the impact of digital technology on children’s brains and nervous systems; if I had, I would've learned Steve Jobs himself didn’t let his kids use the iPad. But, I digress.

Since those days when the iPad was new, the amount of time kids spend on a device has skyrocketed. Common Sense (a nonprofit "on a mission to ensure digital well-being for kids") reported average daily digital media use of 6 hours for tweens and 9 hours for teens in 2015 (and these numbers excluded screen time spent for school or homework), so I can only imagine what it is now.

What Is Persuasive Design?

Many of the tech companies behind some of the most addictive games and apps are designing these things to deliberately suck in as much of the user’s attention as possible. The psychological principles used to design products (apps and other digital environments) that influence behavior is called persuasive design.

Tech companies employ tactics similar to those used by makers of slot machines. Anthropologist Natasha Dow-Schull wrote an award-winning book on this topic called “Addiction by Design”. She found that when gamblers interact with the slot machines, they enter into a state which she calls the “machine zone”. In this state, people lose awareness of their senses and their bodily sensations. This has the effect of “suspending them into a zone where the continuity of electronic play supersedes the physical and temporal continuity of organic being.”

The Effect of Addictive Tech

The director of The Center for Humane Technology, Tristan Harris, is a former Google engineer who became concerned about the large-scale negative impacts of persuasive technology. He says “there’s a whole playbook of techniques that get used [by tech companies] to get you to use the product as long as possible.” Harris has been called the “closest thing Silicon Valley has to a conscience” by The Atlantic magazine.

He tweeted “It’s almost like there’s a race to the bottom of the brainstem to entice people’s attention”.  And if you read my blog about the brain, or know anything about what the brainstem is responsible for, we don’t really want to be operating from the bottom of our brainstem. It’s the center of our most primal survival mechanisms. Not much higher level thinking going on there. Definitely not any creativity.

What’s a Parent to Do?

By the time my kids were in middle school, teachers were asking them to “pull out their phones” in class to do assignments. It felt like I didn’t have a choice whether they got to have a smartphone or not because they were expected to have phones for school.

If I could go back in time to before my kids had their first device, I would set limits from the start about screen time. That is much easier to do at the beginning. Once the kids have devices and are used to having freedom to use them as much as they like, it becomes a struggle to limit screen time. It feels like a punishment rather than something that you are doing to help them be more healthy.

So here are my top 7 tips to help “wean” your child from too much screen time:

When they’re old enough, talk to them about persuasive design. We all have a basic need for autonomy; no one wants to feel like they are being manipulated or that they are not in control of their own time. If you present the facts to them in a way that lets them draw their own conclusions, they’ll be more likely to do what’s in their own best interest than if it seems like they “have” to do it because “you told them so”.

Does your child struggle to pay attention and stay on-task? Check out our free ebook for ideas to boost focus.

Lara has over a decade of experience in digital marketing, and has been helping grow Revibe since 2016. She's also a yoga instructor with a background in health promotion. Lara has a passion for helping people take back control of their own health and productivity. As the Marketing Director at Revibe, she feels fortunate to be advocating for the use of technology in positive, health-promoting ways. In those precious moments outside of work and parenting (she’s a mom to two teens), she likes to go paddleboarding or just lay around with a good book.

Use This School Planner to Get Organized & Focused