Transforming Habits: How to Help a Child Focus in the Classroom

Part One: Understanding How Habits Work

Part Two: The Four Steps to Changing a Habit

Helping a child focus in the classroom is a complex topic. It could involve diet, social skills, their relationship with their teacher, and much more. For the purpose of this blog, we are going to hone in on the psychological mechanisms at play; specifically, how habits are formed (and transformed).

Scientists say that habits are our brain’s way of creating shortcuts. Our brains convert a sequence of actions into an automatic routine. This can be a simple routine such pouring coffee, adding milk and sugar, and drinking. Or something more complex, like all the turns you make on your way to work. These “chunks” of behaviors that are organized into habits free up brain space for you to think about other stuff. We’ve all driven somewhere and then wondered “how did I get here?” because we were lost in other thoughts. Our habits drove us there.

A child may have a habit of tapping a pencil on a desk when they are supposed to be working on their classwork. On the outside, this looks like distracted, off-task behavior. Consider for a moment that this pattern of behavior is the child’s brain stuck in a habit loop.

In the early 1990s, researchers at MIT discovered a simple neurological loop occuring in every habit. Charles Duhigg outlined their work nicely in his book, “The Power of Habit”.

The Three Parts of a Habit Loop

The cue is a trigger that causes the brain to go into the habit mode. In the classroom example, the cue might be when the student is given a worksheet to complete in class.

The routine is whatever behavior is triggered by this cue, like the pencil tapping.

The reward is what helps the brain decide if this habit is a good one to repeat. For example, if the pencil tapping brings them a feeling of relief or entertainment, that good feeling they get would be the reward. 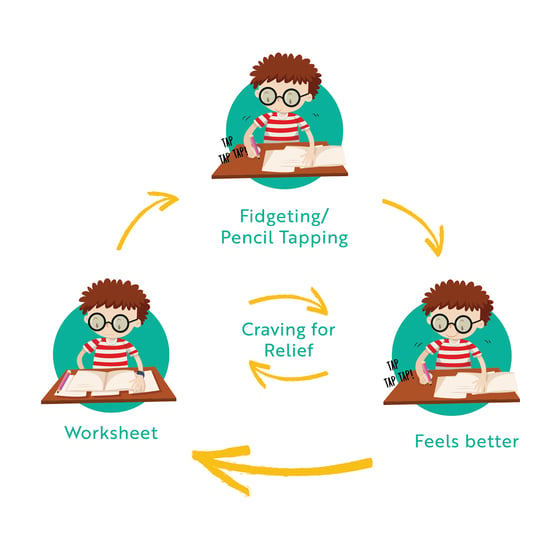 Pencil tapping: An example of the habit loop in the classroom.

Typically, in a classroom, in order to interrupt this behavior, a teacher would need to intervene to break them out of the habit loop. The teacher might come over and tap them on the shoulder, or, they may verbally call them out in front of their classmates. This intervention may work to get the student on-task temporarily, but does nothing to transform the habit. The next time the student receives the cue, their brains will likely launch into the habit loop.

In order to transform a habit, you have to substitute a new routine. The cues and the rewards will stay the same, but there has to be a new routine in the middle. Instead of pencil tapping, the new routine we would like to insert is “work completion”. We want the student to get the reward of “feeling better” from the satisfaction of completing their work.

This is where Revibe can be a helpful tool. Vibration reminders from Revibe interrupt old habit loops and help students form new routines by sparking self-awareness. 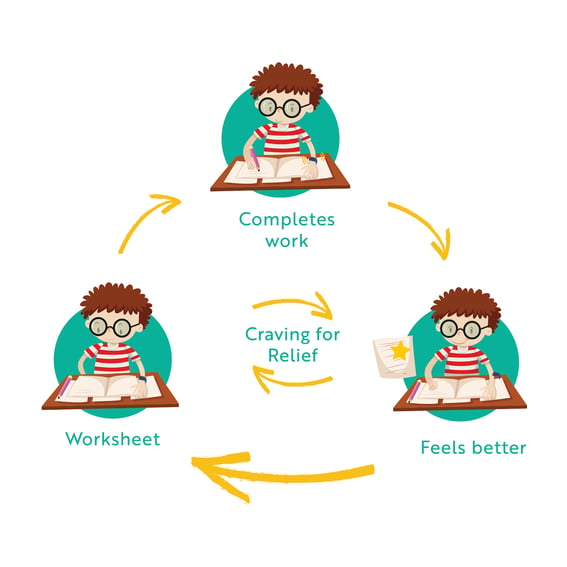 Revibe intervenes in the habit loop, creating a new routine of work completion, which leads to the same reward: a feeling of satisfaction.

The Four Steps to Changing a Habit

As we've learned, habits are made up of three parts: the cue, the routine and the reward.

In the Appendix of “The Power of Habit”, Charles Duhigg explains a four part framework for changing habits:

Step One: Identify the Routine

Children can have many different routines or tendencies - from looking out the window, to picking fights with their classmates. These behaviors are various ways for the kids to meet their emotional needs. It is helpful to identify what routines your child tends toward.

Next, figure out what is the cue for the routine. Does it happen at a certain time of day? Maybe when they have gone too long without eating and they are hungry? Is it more likely to happen when around certain people?

Parents don’t have a lot of control over what happens in the classroom, but they can try to communicate with teachers to better understand their child’s reward-seeking behaviors and identify what it is the child is needing. At home, when they notice similar routine behaviors, parents have an opportunity to experiment with rewards. 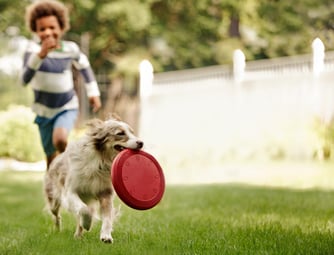 For example, if the student is distracted during homework time, instead of letting them sit there and fidget, ask them if they would like to take a short walk (set a timer or a predetermined distance). The next day, try letting them fidget like they normally do. The following day, try making them take a 5 minute break to play with the dog or their favorite toy for every 15 minutes they work.

This is a great way to not only connect with your child, but to help them to observe and understand their own emotional fluctuations. Sometimes the “reward” they are seeking is meeting an emotional need. Sometimes it may be a physical need. These observations will help you discover what is at the root of the cravings and habits.

Cues can be tricky to identify. In our modern lives, we are bombarded with stimulation, and there are various aspects of any given situation that could be the cue.

According to Duhigg, experiments have shown that almost all habitual cues fit into one of five categories:

If you are dealing with inattention in a student, ask your teacher to help notice the circumstances during which inattentive behavior occurs. Asking the following questions will help identify the “cue”:

After you take the time to collect all of this information and experiment with different rewards, patterns will emerge.

Step Four: Have a Plan

With the awareness of patterns, you can begin to make choices about how to best set up the student for success. You can formulate strategies for what they will do when you predict willpower will be at a low point. If you discover that playing with the dog for 5 minutes really helped get through the homework session, you can schedule that playtime in.

It helps to write down the plans. Writing down goals and plans increases the likelihood of success. It can be helpful to sit down with your child and write out little strategies for encountering certain cues. If they can write it in the first person, even better.

B.J. Fogg is the director of the Persuasive Technology Lab at Stanford University, where they are researching the latest breakthroughs in behavior science. He's also the author of "Tiny Habits", a book that encourages the celebration of small incremental habit changes.

He recommends writing statements in this format:

For example: “Right after I finish my after school snack, I will start on my homework.”

It might take some time before you notice improvement, but the idea is that over time, these new habits will become automatic. That means they start doing the good habits without deciding to do them!

We understand that parents don’t always have as much time as they would like to help their children one-on-one. The fast pace of modern life means that during homework time, most working parents are trying to also do a number of other important tasks such as cooking dinner or helping other siblings. Even parents who understand that their children need emotional connection and direction while shaping their study habits may find it hard to find the time to dedicate to this effort on a daily basis.

This is where Revibe can be a helpful tool to add to the behavioral toolkit, as it intervenes when the parent or teacher cannot. These are crucial moments when a child is forming the habitual patterns that will more than likely stay with them through adulthood.

Revibe gives vibration reminders in the form of gentle tactile stimulation to the wrist. The child is instructed to ask themselves, “Am I doing what I am supposed to be doing?” during the moment when they receive the vibration. This sparks a moment of self-awareness when the child realizes what they are doing. This is called meta-cognition. They are instructed to get back to work if they notice they were off-task. If they notice they are on-task, they are to “pat themselves on the back” and get back to work.

Instead of being stuck in the routine of being off-task, with Revibe, the child substitutes a new routine of completing their work. This leads them to the reward of feeling accomplished. Hopefully this reward is reinforced with positive remarks from their teacher, and encouragement from parents.

Revibe can also help with the identification of patterns. In the Revibe App, parents can compare focus rates in the morning versus the afternoon. They can look at different subjects and compare trends. The Revibe also offers simple insights when patterns are identified by the machine learning algorithm. All this information helps the parent to identify components of the habit loop that are contributing to the habit of inattention. 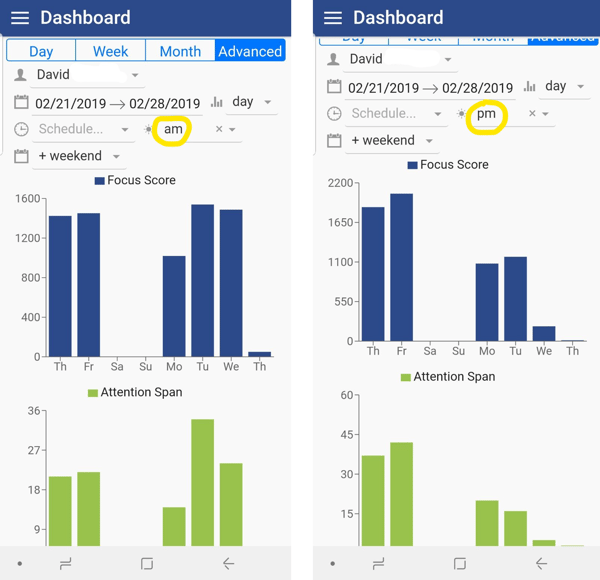 Data from the app: A comparison of Focus Score between "AM" hours and "PM" hours during a one week span.

Revibe is a tool that can help schedule in the routines your child needs to be successful. If you notice they tend to work better if they have a snack before homework, you can set a custom reminder to appear on their Revibe with a healthy snack. “Check fridge for fruit/veg” can appear on weekdays at 3:30 when they get home from school.

These text reminders and schedules help reinforce new habit patterns. If you would like to encourage your child to start their homework after they get an after school snack, you could build these events into the schedule.

With repetition, over time, habits can be transformed. Certain behaviors become automatic, which is nice because they no longer feel like a struggle. Awareness is a lot of the battle. And now that you know how habits work, they are demystified, giving you power to experiment and improve!

To kickstart things, give your child this worksheet to help them understand and engage in the the habit changing process. They might appreciate you being there to fill it out with them if the thought of change makes them freeze up, or they might prefer to self-direct if there's been some tension in the air surrounding the habit but they recognize the need for change. Consider asking them what would help most!

Lara has over a decade of experience in digital marketing, and has been helping grow Revibe since 2016. She's also a yoga instructor with a background in health promotion. Lara has a passion for helping people take back control of their own health and productivity. As the Marketing Director at Revibe, she feels fortunate to be advocating for the use of technology in positive, health-promoting ways. In those precious moments outside of work and parenting (she’s a mom to two teens), she likes to go paddleboarding or just lay around with a good book.