The following review of Revibe Connect was written by a real customer, Rob M.

The Revibe Connect is a small device worn on the child's arm like a watch that will help them remember tasks or to remain on task when focus is an issue. It does this by means of a small display on the wrist unit and the vibrations the unit puts out at certain intervals. Hardware wise, there isn't much here, and that is a good thing. Simplicity is what all parents hope for when dealing with children. I will go on record and say that the Revibe Connect was easily one of the easiest devices in the world to connect. We tried all manners of home and social fixed, ultimately, we opted to try the Revibe.

When you first open the box for the Revibe, you will be greeted with standard fare for any new electronic device – a quick start guide and some helpful tips. From there, the package takes on a unique and awesome twist. The box doubles as a charging stand for the Revibe. I was floored! Once you unpack the charger and unit, the instructions tell you to flip the package insert over and you now have an instant charging stand. They even include a small notched cutout in the side of the box to permit the charge cord to come through. It is very clean and my kid loves it.

Before you do anything with the Revibe, download the app from Apple’s app store and charge the device. Everything is done from this app. At the time of this writing, there is a website to view the Revibe data, but it is view only. Programming and setup will all be done through the application. Don’t let the word "programming" scare you, the app is a snap to use.

Setup is as simple as opening the app. Let the app search for the device, enter in a few details about the person the Revibe is for, and finally let it do a quick sync check. It should search for and connect to the Revibe automatically. You won’t have to go into Bluetooth settings and pair or anything, just open the app and follow along. 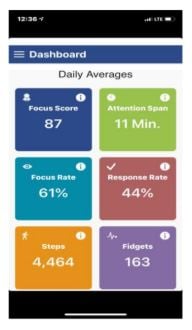 When you first start the application and finish setup of the person who will be using it, you will come to the dashboard. This is the main area for information. Here, there are six categories that the Revibe automatically tracks: attention span, focus rate, response rate, steps (pedometer), and number of fidgets. All of these are then computed together to come up with a focus score.

Programming the device can be done inside the application and it is as simple as adding events to a calendar. You set your child’s school schedule of classes, times you don’t want it to buzz, or even add short text reminders that display on the screen to remind your child to “grab homework” or whatever you wish it to say.

We set this up for one of our boys who is currently having issues with focus and concentration at school. We have been using the device now for about a month. First of all, because it seems “high tech” and has a cool black appearance, my son took to it right away. Wearing it has not been a problem for our child. Although. I will have to say that he has been wishing there was a band that used hook and loop (Velcro) or a band similar to the ones on Apple watches. That, however, has been a mild complaint. He remembers to charge it and put it on every morning, so that has been amazing.

Over the course of the next few days, we didn’t see much difference in his baseline numbers from day one. Focus rate, attention span, all that was still very much a flat line. However, in week two, things took a much better turn. His grade in math took a strong upturn. Prior to this device, we had been receiving emails about his daydreaming, lack of focus, etc. Now, we were seeing his focus and attention span numbers were skyrocketing. The emails ceased from his teachers as well. He has had nearly 100 percent tap rates in the last two weeks, so he is acknowledging his buzzes and responding accordingly. We have been very pleased.

On his side of things, he gets a real feeling of satisfaction seeing his numbers climb. He comes home from school and grabs my phone instantly to do a sync. You do this each day or so to view the results of that day’s activity...He views this as sort of a game. He loves the praise we give him for his improving numbers, and ironically, we believe he doesn’t realize how much it is helping him at school because of his determination to do good on these aggregate scores. That is the genius of the device, it makes him pay attention to it in order to get better scores, but when he does, he is paying attention more in class. His fidgeting has dropped, grades improved, and he truly enjoys wearing it. Another nice feature of the Revibe is that it doesn’t necessarily look like a device that is “helping” a kid with an issue. It looks like a Fitbit or a sleek watch. It is not flashy so it doesn’t draw attention from classmates.

I believe that this device is something that parents of children with attention issues should definitely consider. Our experience, though, has shown that this is not a quick fix. This is something the child must first adapt to, and actually USE. We were lucky, the using of it came naturally because our child is keenly into electronics of all kinds. Other parents might not be so lucky. Don’t give up though, from what we have seen, prolonged use of this device has given some amazing results. Nothing earth shattering, nothing fast. You will just realize one day that your child has started improving. For us, it was this week when we noticed our child went from a 5 minute attention span score in his first week, to over an hour this week, four weeks later.

Give this unit a try.